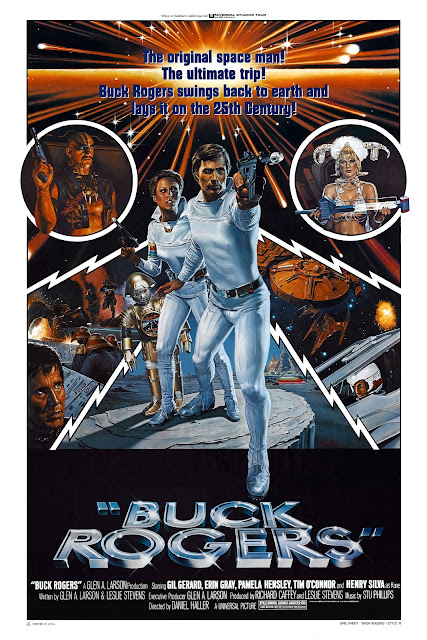 Coming in at number 19 is Buck Rogers in the 25th Century.  I hold this one dear to my heart since along with the original Battlestar this was one of my first introductions to Sci-Fi TV in the  post Star Wars era that cashed in on space battles.  Buck Rogers follows a 20th Century astronaut that is revived after 500 years into the future.  Buck ends up becoming a hero in this future Earth with the help of his football tackling skills which he uses pretty much every episode.    This was campy fun sci-fi..a throwback to Flash Gordon.  It was silly sci-fi with talking robots that are trying to be like R2D2, but look more like Tattoo from Fantasy Island.
Gil Gerad was perfect as Buck and Erin Gray was totally sexy in those skin tight flight outfights (one of my first celebrity crushes).  Buck Rogers was just good clean silly fun.

My Movie Facebook page
https://www.facebook.com/pages/Brads-Super-Fantastic-Terrific-Page-of-Movies/178708865473822
Posted by brad chowen at 8:11 AM