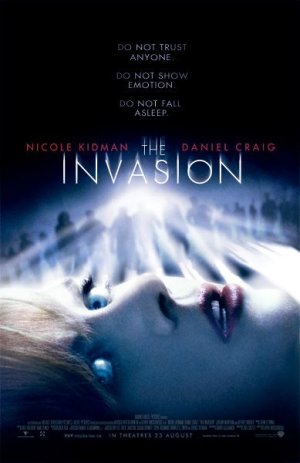 We should really stop sending space ships into outer space because they always end up bringing something back that doesn't like us.  It is like these alien viruses are just sitting out in space waiting to hitch hike their way to earth so that they can try and take over the world.   The Invasion is a decent updated version of the Invasion of the Body Snatchers story.  It stars  Nicole Kidman as a psychiatrist that uncovers an alien plot to take over the world.  The alien virus spreads from person to person like some zombie plague.  The only way to fool the aliens once they have taken over their human hosts is to show no emotion.   A pair of the sunglasses from my favorite version of this re thread story  They Live would have really come in handy for the characters in this story.  The movie itself is a decent watch, but there is nothing here that you haven't already seen in previous telling of this story and the resolution at the end of the movie was just way easy.