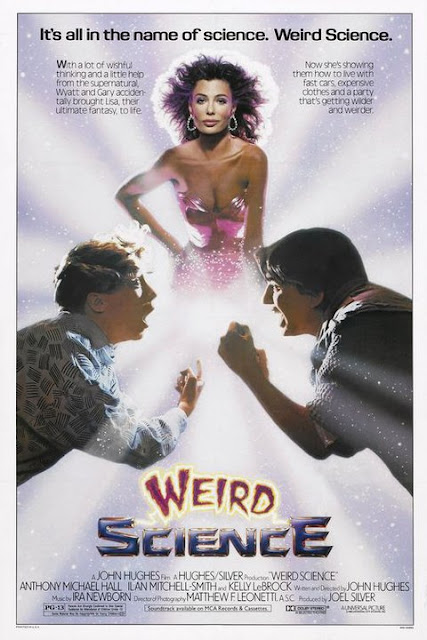 A couple of nerds with a magical computer and bras on their heads create a women with science....Weird Science that is......This modern take on the Frankenstein story shows what would happen if Dr. Frankenstein was a couple of horny, nerdy virgins as created by John Hughes.    Sounds like a good idea to me.... Back in 1985 I personally would have made Heather Locklear...but to each his own.  This film gave us the kick ass Oingo Boingo song.  This movie also gave us one of the best minor character performances of Bill Paxton as the older brother Chet that picks on his younger brother and his nerdy friend.  This movie was another near perfect John Hughes film that again captured that awkward stage of teens this time in a funny magically setting.

When I first saw the article  below on the Weird Science possibly getting a remake I got excited.  (HERE is link to article on Yahoo movies)

Weird Science is a perfect movie for a remake.   The magical aspects of the movie are ripe for modern special effects to up the ante of the supernatural elements from the original movie. The timing is right since it has been over 25 years since the original and if Hollywood is going to remake movies anyway I'd rather see things like Tron and Weird Science that had great concepts and can now be done better as a result of the leap in Special Effects.   Questions arise as to who should be cast?   Who would the new Weird Science girl be??   That was the one thing I didn't like in the first movie.....because Kelly Lebrock was definitely not my personal idea of the ideal girl back in the 1990's.   So who would Hollywood pick as the ideal girl today?   Angeline Jolie probably would have been the selection if this movie had been made about 6 years ago even though again not who I would pick.  Is she could act I'd love to see Kate Upton as the choice.    What girl would you like to see in this role?    And who would play Chet,  the classic character played so perfectly by Bill Paxton before his even more amazing character in Aliens?    Again if this movie had been done 6 years ago Sean Scott Williams would have been perfect for the role, but is a little too old now.

Let's hope that this news is true and that Hollwood gets this remake right.