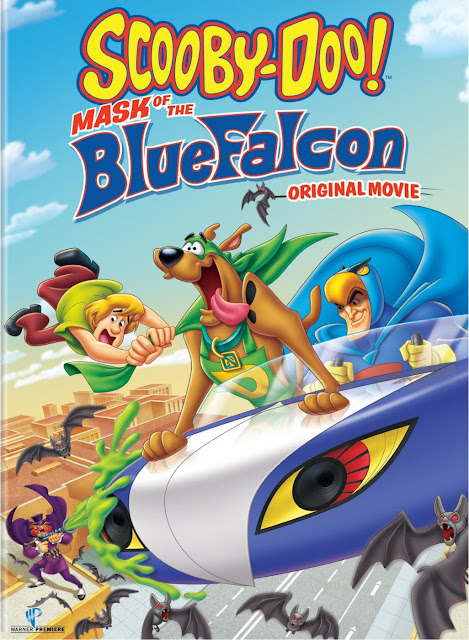 Scooby and the gang head off to Comic Con for a fun action packed adventure in the latest direct to DVD movie Scooby Doo movie .  The gang must solve a mystery that  surrounds the convention and the release of an new updated and much darker  Blue Falcon movie . Scooby has to find his inner Dog Wonder and help solve the mystery An old nemesis of the Blue Falcon from the original TV show is terrorizing the convention and trying to put a stop to the new movies release.   This story did a great job of paying homage to many old Hanna Barbara characters by using the Comic Con as a setting.  It was and action packed story that played on the updating of the old Batman TV series starring Adam West with  the newer darker films.   Blue Falcon was a silly cartoon version of Batman with a robot dog as a sidekick.  The new and improved  Blue Falcon movie with was an obvious evolution.   The funny thing about watching this movie is that it really isn't that far fetched.  I can totally see The Blue Falcon getting made into a big screen live action movie someday,  after all Hollywood is all about.  I mean the Smurfs and Alvin and the Chipmunks have all been made into movies,  why not  the Blue Falcon.   The character has recently made appearances on Mystery Inc Scooby Doo series in an episode that featured the character and now was the focus of a Scooby Doo as well.   Bring the Blue Falcon to the big screen with a CGI  Dynomutt.  All in all this was a very solid Direct to DVD Scooby Doo movie.

Email ThisBlogThis!Share to TwitterShare to FacebookShare to Pinterest
Labels: Blue Falcon, Scooby Doo, Scooby Doo and the Mask of the Blue Falcon