Plane Crash Double Feature: Five Came Back 1939 and Back from Eternity 1956 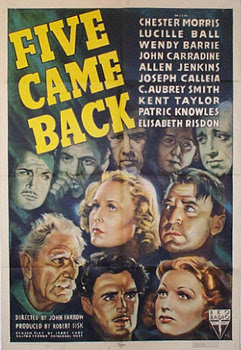 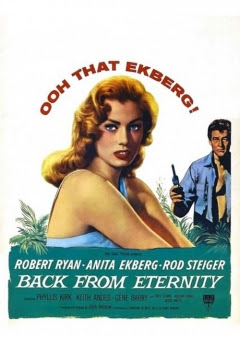 This movie description applies to both movies since Back from Eternity is a total remake of the original even being done by the same exact director.   It is like watching a play twice and just having different actors playing the roles. Both versions are equally effective .   The movies are about a plane bound for South American with a wide range of passengers including a hooker,  a couple about to get marrie, and older couple and a murderer.  It is like a dramatic Gilligan's Island.  They crash land in uninhabited area that has a tribe of cannibals.  It deals with the how the crash survivors deal with the crash and struggle to repair the plane to hopefully get out before the cannibals find them.  They fix the plane but it will only get airborne with 5 of the original 12 passengers.   The story concept is good and in both cases of the almost identical films the plot and acting were good.  In both films the tension builds over the near perfect backdrop of the sounds of the cannibals drums in the background.  Once the drums stop the final decision of who leaves needs to be made.

Five Came Back starred a young Lucille Ball (way before he I Love Lucy days)  and Chester Morris .  The 1956 remake features  the beautiful Anita Ekberg, Robert Ryan and Rod Steiger.

Here is a trailer for Back to Eternity