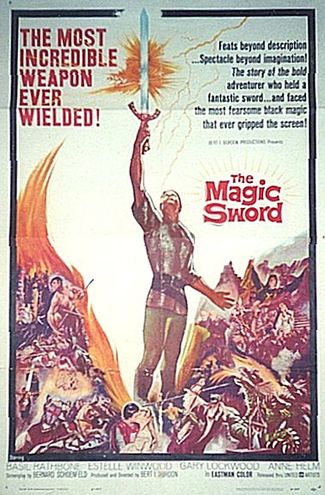 An Evil Wizard (Basil Rathbone of Sherlock Holmes fame)   captures a princess which he will feed to his pet dragon unless he gets what he wants.  The son of a bumbling sorceress takes a magical sword and goes on a quest with some knights to rescue her.    The quest like all quests is filled with danger (7 curses to be exact.)  Most of the curses involve terrible makeup like the giant Ogre that was bascially someone in a bad used  Wolfman costume made to look huge by green screens.    The concept for the film was interesting so it gets points for that, but the execution was silly  which made for a really cheesy movie.   It could be remade today with a more serious tone and better effects.  This fantasy adventure was just odd like Santa Claus vs the Martians or some other weird film.