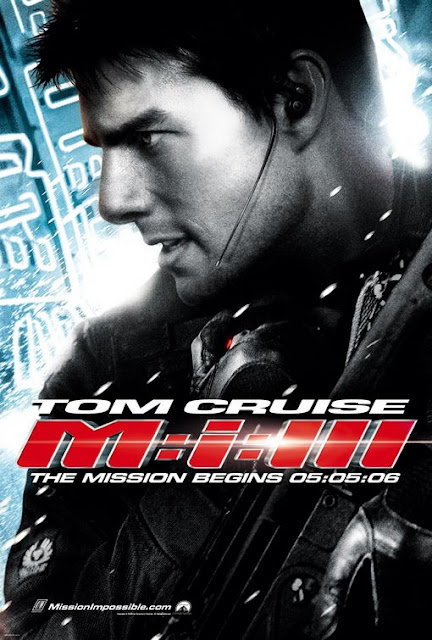 I had tuned out the Mission Impossible series after the disaster that was Mission Impossible 2.  MI2 was one of the worst big budget sequels I had seen at the time and I just really didn't want to see number 3 after my experience with number 2.    Well MI3 played the other night on TV and I decided to DVR it and give it a chance since its director J.J. Abrams will be at the helm of my beloved Star Wars franchise.  Having not liked the Star Trek reboot ...but having liked some of his other work I wanted to see what he did with Mission Impossible.    I'm glad to say that MI2 was actually pretty good.   Tom Cruise again stars as Ethan Hunt a spy that always seems to be dealing with double crosses (if I was this dude I wouldn't trust anyone).  Mission Impossible 3 delivers with some exciting action sequences and a good story, plus the bonus of having the strong acting of Phillip Seymour Hoffman who makes for a much better villain than the recent Bond flick (which I thought was just odd).   Mission Impossible 3 is a solid 8 out of 10.  I'll have to check out the well received MI4 now.  As far as my thoughts on Abrams......I think he is a capable director that has a good chance to do Star Wars right......but I'm still a little worried for the Star Wars franchise to be in his hands.