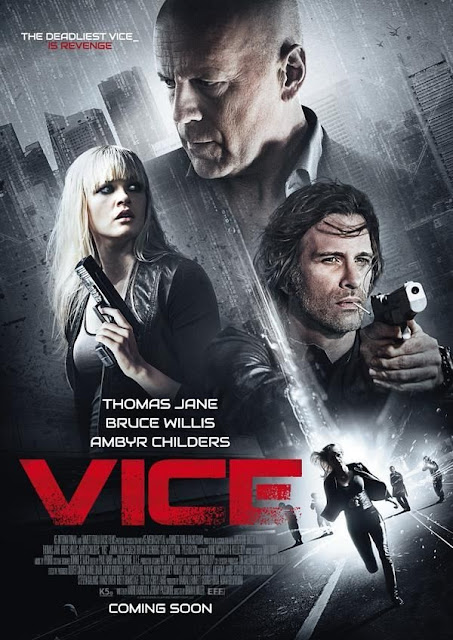 
VICE is a poor man’s Westworld.  I was searching Netflix for some Sci-Fi movies that I may have overlooked and came across VICE starring Bruce Willis and the trailer looked interesting so I put it to the top of my Netflix queue.  It looked like a more extreme version of a Westworld type story where people pay to visit the VICE resort (owned by Bruce Willis’s character) to basically live out Fantasy Island style dreams of Murder and Sex with no consequences.   The Artificials that live in this resort basically live the same day over and over again.  They get killed by the guests and are just reprogrammed to the previous morning with no memory of what happened.  Then one Artificial (played by Ambyr Childers)  glitches and recalls being murdered the day before.   She escapes the resort into the real world and is chased down by the goons from the Resort.    Thomas Jane  (from The Expanse)  plays a cop looking to bring down the resort that is also chasing down the Artificial.    The movie sounds better than it is.  I’ve seen much better movies dealing with Humanoid Robots coming to terms with the fact they aren’t human.  Blade Runner of course comes to mind as does Ex Machina or the BattleStar Gallactica reboot.  Even Josh Whedon’s the Dollhouse basically treaded on this material (even though it was with programmed humans).   These movie teases interesting stuff –but basically gives you a standard characters running away from bullets from the people that are trying to hunt them down storyline.  It doesn’t get into any of the really interesting stuff I was hoping to see.   The Artifical comes to terms with being a robot almost immediately.  A waster of the most interesting element in the story.  Bruce Willis was basically wasted in the role of the owner of VICE.  Anyone could have been in that role and it wouldn’t have changed the movie.     Basically it was a disappointment…. I hope the Westworld  Mini-Series does a much better job than this cheap rip-off did.

Here is our movie Podcast.