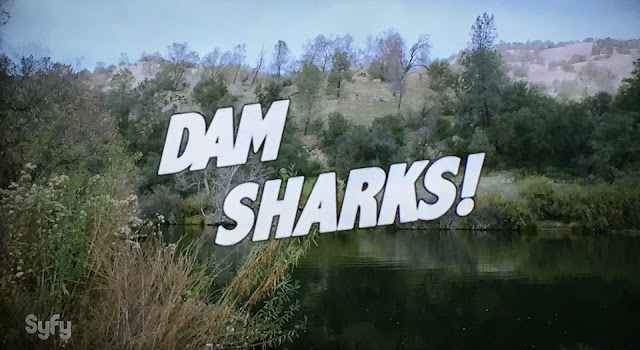 Dam Sharks is just one of a slew of bad shark movies that premiered on Syfy this past weekend as a part of their Sharknado block of movies.    The fact that the sharks are in a river is briefly explained at the start of the movie.  A storm is shown washing over a model that looks like a 6th grade tidal display.   The fact that the sharks are building a dam out of human body parts isn’t explained what so ever.  The only reason for this behavior is that it gave the producers the excuse to call the movie Dam Sharks.


A company retreat is going on along a river.  The CEO is trying to cheer up some employees to distract from the fact that he is about to fire over 70 employees.   The river is full of sharks so this company retreat is going to be a bloodbath.   We get scenes of people zip lining into sharks and getting attacked during team building raft race.  The movie is thin on plot and has the standard CGI Shark footage.  The logic of the characters in the film is as stupid as you would expect. They are so dumb that they all deserve to die.


After several characters have made it safely to shore after sharks attacked their raft  they decide to walk down a trail to get to the ranger station.    Of course they reach a point where the ranger station is on the other side of the river.  So it is decision time.  They can stay on the land on the road they are walking on or try and cross the log that goes across the Shark filled river.    Of course they choose to walk across the log.  Crossing a log over a river filled with sharks is the logical decision.   I won’t tell you what happens –but it doesn’t take the Scooby Doo Gang to figure out how this mystery turns out.

In summary:
It isn’t a good  bad shark movie.
It fails to be a SO BAD It IS GOOD shark movie….  But If you like me you need to see every single cheesy shark movie that comes out....then you may enjoy it.