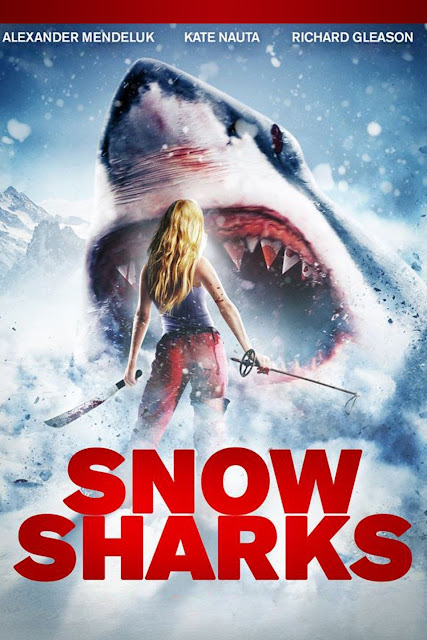 This bad shark movie was so bad that even the Syfy Channel wouldn't show it.  Snow Sharks has a great poster and looks funny according to the trailer, but it is just bad.  Sure you could say that it is the best movie made about Snow Sharks---but unfortunately it is also the worst. The Best thing about this movie is the poster. The second best thing about this movie is that it was filmed in Mammoth Lakes CA.  I recognized so many parts of the mountain while watching this worthless silly Snow Shark
adventure.

The Plot:It is spring break and the resort is full of people ready to party.  The only problem is a couple of skiers that are out of bounds have disturbed an ancient Indian legend.  Snow Sharks begin to swim through the snow attacking the skiers. Of course the sheriff wants to close the resort down--but the infamous Jaws Scenario is evoked by the Mayor and resort owner that don't believe in the Snow Sharks.  Of course the carnage continues as a bunch of bad CGI shark fins make their way through the snow gobbling about skiers and bikini clad girls in a ski resort hot tub.    The main characters eventually survive as a random skier fixes the Totems that unleash the sharks.  The plot is very thin and weak, the acting is pretty bad and the movie is only mildly entertaining.

My updated list of Bad Shark Movies is here

Our Podcast page is here
http://www.superfantasticterrific.com/
Posted by brad chowen at 6:53 PM