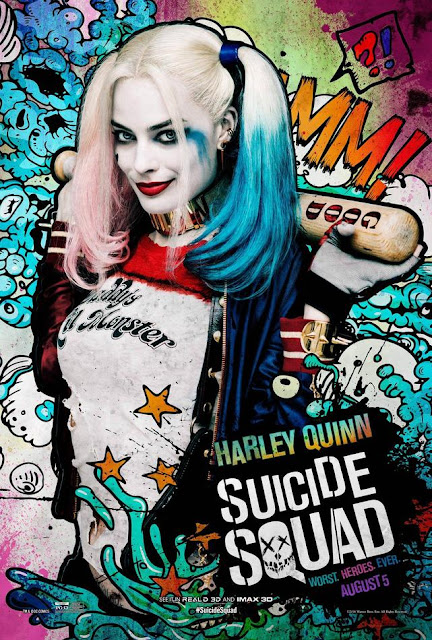 I'll start this review by saying that I'm not a DC comic book fan -
so I've never read Suicide Squad and I'm not really familiar with main characters so I have no preconcieved notions.  I personally hated Batman Vs Superman and thought it was one of the worst big budget movies of the year so far.  I wasn't dying to see Suicide Squad --but rather just went because some friends were going to see it...and I thought why not.   That being said I thought Suicide Squad was a mixed bag of both good and bad. It wasn't a great film --but was still fun at the same time.

The Plot
The plot wasn't that impressive.  The movie starts off by spending time trying to introduce you to some of he villains.  It feels like a Batman's best arrests scene.  Almost like the first part of the movie was an advertisement for the movie instead of the movie itself (as one of my friends pointed out).   After the lengthy intros the best way to describe Suicide Squad is that it is Escape From New York meets Ghostbusters.   The entire storyline is Escape From New York.   The only difference is that instead of one criminal implanted with a kill device sent into a dangerous character to save someone important -they send in a team.   The team battles through the war zone and make the rescue only to bump into Gozer from the original Ghostbusters at the end of the film twerking in a scantily clad outfit. I was expecting the MarshMellow Man to show up at any moment.  If he had Diablo could have taken him out in spectacular fashion.

The Characters
The best thing about Suicide Squad is Harley Quinn played by Margot Robbie.  Every second that Harley Qunn is on the screen she owns the movie.  You can't take your eyes off of her.   Her character is visually stunning.  Harley Quinn is  super sexy and crazy as a loon.  Margot Robbie absolutely knocked it out of the park with her baseball hat and bubble gum chewing awesomeness.   Will Smith as Deadshot shows that he still has it.  Will Smith brings the swagger that he once had in films like Independence Day and Men in Black.  He was the villain that you could relate with the most.  His connection with his daughter was the key that made him seem more like a hero than a villain.   Like I mentioned I don't really know the characters so I don't know if this is accurate to the comic book character.   The rest of the crew is mainly unimpressive.  Boomerang and Killer Croc are just lame.   The character Diablo's storyline was laughable at times --in places you probably weren't supposed to laugh.  I was most disappointed with Jared Leto as the Joker.  First of all the character had a minor role in the film.  This is the one character I'm the most familiar with from the Batman Tv show, Movies and Cartoons.  Jared Leto's Joker felt bland.  He just seemed like a punk rock looking gangster and didn't have the screen presence of Jack or Heath.   I wasn't impressed with the Joker as a character at all in this film.  In fact I'd rather see 1960's TV Show Joker over this protrayal.

Other thoughts:  I know it is an interesting concept to gather a bunch of villains together as an Expendables type crew to get some dangerous job done, but the stakes were too high.  When what is at risk is the end of the world --- you may want to call Batman or some of the Justice League characters to get involved.  Is the Bat Signal broken?   If it is this big connected DC universe --the big guns would be called in when the Gozer and the Stay Puff Marshmellow Man are threatening the entire planet.  You can't have Batman and the Flash capturing these villains at the start of the film and then being no where to be found when the planet is at risk at the climax of the film.  If you are going to sideline those major characters -you need to at least explain it or give the Suicide Squad a less world ending mission.

Final Thoughts
I'd say see it for Harley Quinn alone....It is fun as a summer popcorn flick if you don't put too much thought into it.