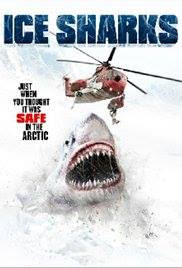 The shark movie genre has become outrageous and over the top.
The genre is ruled by Sharknados , Ghost Sharks, Sharktopuses and Robot Sharks.  I recently watched the silliness that was Snow Sharks and figured Ice Sharks would be more of the same.

The problem with Ice Sharks is that it tried to take itself too seriously.    You can’t have a movie that starts with Sharks carving through the ice with their fins like a cartoon in order to send a research station adrift and expect people to then take it seriously.   The didn’t take the tone that the silliness of the Ice Sharks called for.  Instead we get a low budget serious story about survival that just wasn’t exciting enough.   Instead of silly Ice Shark carnage we get scenes of the characters trying to figure out how to get rescued after their facility sinks to the bottom of the ocean and they are running out of air.   The acting isn’t good enough for this to be a serious survival movie.  If you are going to make a movie called Ice Sharks –you need to embrace the type of movie you are making and go for the laughs.

To listen to our Podcast  go HERE
http://www.superfantasticterrific.com/super-fantastic-terrific-show-8-dark-city-shark-movies/
Posted by brad chowen at 7:06 PM