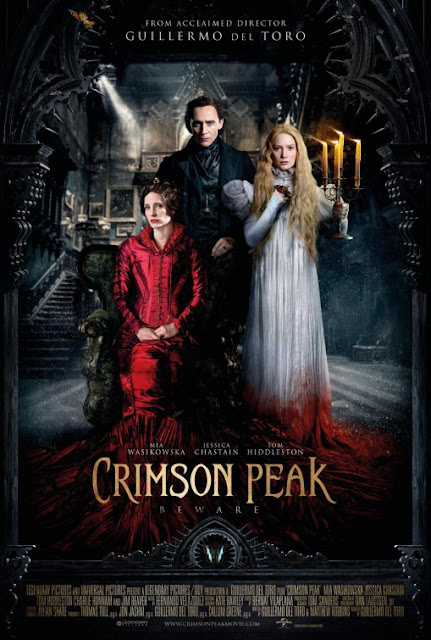 My interest in watching Crimson Peak was because Guillermo del Toro has for years been wanting to do a new Haunted Mansion movie for Disney.  He has confirmed as recently as April of 2016 that he is still writing a Haunted Mansion movie.
You can read about that below at Inside the Magic.

In the meantime he has been busy making non-Disney horror movies giving us a glimpse of what might be seeing if he ever makes that Disney film.
I the past couple of years he wrote Don't be Afraid of the Dark and wrote and directed Crimson Peak.

Crimson Peak is a throwback to Horror movies from the past by Hammer Studios or old Vincent Price films, instead of the gross out slasher type flicks that have been popular in recent decades it is a Gothic love/ghost story.

The Look of the Film     A+
The art direction in Crimson Peak is incredible.  Guillermo del Toro has mastered the look of a big screen haunted house.  Part of the story includes the mining of red clay and this plot point gives the director an amazing color palate to play with.  The red clay in the snow looks like blood and adds to the ominous tone of the film. Visually the film is stunning.  In this way Guillermo's films are much like those of Tim Burton.   Even if you don't like a Tim Burton movie they  tend to look amazing.  The same is true for Guillermo del Toro's films.  He has a unique look and style to his films and Crimson Peak is no different.

The Cast    B
Crimson Peak has a great cast including Mia Wasikowska (Alice in Wonderland), Tom Hiddleston (Loki from the Avengers), and Jessica Chastain (Mad Men).  I think they all did a decent job with the material they were given

The Story    D
The problem I have with Crimson Peak is the story.
As I mentioned  before it was a throwback to older films -- but so much so that it was extremely predictable.  It didn't feel original.
It was the old marry some rich person for their money and then have them killed off storyline that I have seen way too many times before.   I was hoping for and expecting some twist -- but that twist never really happened.   The movies setting was so perfect for a Haunted House story --but the ghosts were merely just there to warn the main character played by Mia Wasikowska about the dangers of the place and the ghosts themselves were strange bloody skeletons.   If Guillermo del Toro does ever make a Haunted Mansion film for Disney ----I'm convinced that it will look absolutely amazing......but I worry about his script writing skills.

Listen to the Podcast HERE
http://www.superfantasticterrific.com/
Posted by brad chowen at 7:25 PM