“Welcome to Jurassic Park”  Those words thrilled back in 1993 and still thrill today. 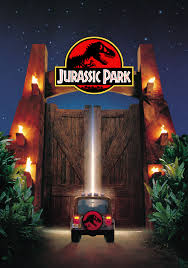 I’ve had Jurassic fever lately as the new film was set to roll into theaters.
I absolutely loved the original Jurassic Park directed by Steven Spielberg.   So this weekend I made time to watch the original all over again for the first time in years.   It was a groundbreaking special effect movie when it came out and for me completely holds up as one of my favorites.   It was vintage Spielberg  (one of a few directors that I will see a movie from just because they directed it).  It still has that sense of wonder.  It still has those classic Spielberg zoom ins and reaction shots.  It still has the T Rex scene is still one of the coolest scenes I’ve ever seen.
Jurassic Park is based on the amazing book by Michael Crichton.
I read the book as well when the original came out it was also great.    In most cases people  will say the “the book is better”   --well Jurassic Park is one of those rare cases where both were equally incredible.   Jurassic Park is basically a remake of a previous Crichton film  Westworld.   It is the same exact concept just replacing Robots with Dinosaurs and –I’m glad he rehashed his own work.---because he got it so much better the second time around.

A theme park with Dinosaurs brought back to life using their DNA.  What an amazing concept!  and what a great movie.  Of course it doesn't go as planned.  The movie can pretty much be summed up by this one memorable qoute:

John Hammond: All major theme parks have delays. When they opened Disneyland in 1956, nothing worked!
Dr. Ian Malcolm: Yeah, but, John, if The Pirates of the Caribbean breaks down, the pirates don't eat the tourists.

Steven Spielberg and ILM brought dinosaurs to life for the first time ever on screen.  Dinosaurs that weren’t stop motion puppets.  The leap in special effects this film made –made many other films possible that weren’t possible before.  It is a landmark film so I was very excited to see  the franchise coming back to the big screen this summer.  Enjoy the new film and if for some reason you haven’t seen the original and the Spielberg directed sequel  Lost World catch those as well and go back and read  the Crichton books.