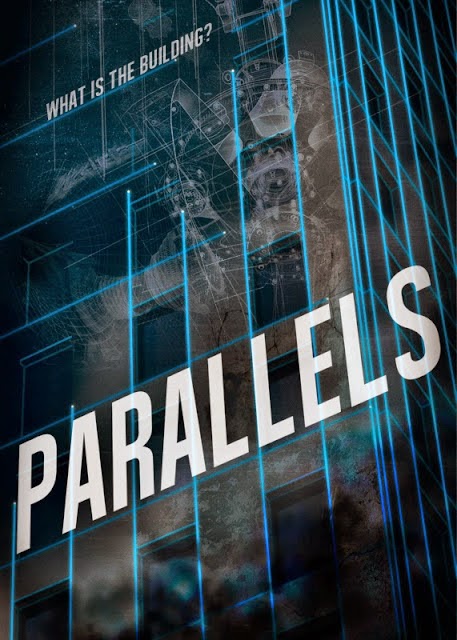 Parallels is an alternate universe movie that features a brother and sister that reunite after getting a strange message from their father to meet at an old building downtown.  They arrive at this strange building with neighborhood friend and find no one there.  Then the building transports them to a parallel universe.   It is like a giant parallel world traveling Tardis.

When I read the description of the film while flipping through Netflix on the Roku --Immediately I thought that this sounded a lot like the old cheesy fun TV show Sliders.  That first impression was pretty much dead on --this movie was very much an updated and more gritty version of Sliders.   They travel from parallel universe to parallel universe as they search for their dad and a way back home.

The first world that they land on is a world that has been devastated by nuclear war -they meet a mysterious girl that is familiar with the building and what it does as she has been traveling on it for awhile. They are taken prisoner by some survivors on that world and must escape and return to the building in order to move on to the next world.  After barely escaping this world and end up on a technically advanced world where they continue to look for answers to what happened to their dad.   At this point the movie I kept thinking that they aren't going to visit many worlds in this movie and that this concept works much better as a weekly tv show.  As the movie goes on you realize that obviously that is what this was meant to be.

We get to the end of the movie that has a couple of cool reveals yet leaves many questions unanswered and asks new questions.  At this point it is 100% clear that this was a pilot episode for a TV Series.  It sets up perfectly for a series of adventures on numerous worlds which the concept of this updated Sliders lends itself to perfectly.

Parallels is an interesting sci fi movie that I would recommend to anyone that was a fan of Sliders or that finds the parallel universes concept.    I would just warn you that if you want a conclusion --you will probably never get one since this TV show pilot turned movie isn't likely to have a series.