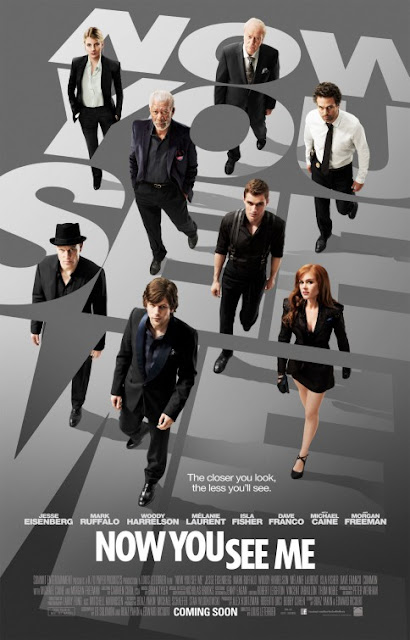 Slight of hand and misdirection.  The plot of the movie follows 4 magicians that show up to a meeting after receiving a mysterious invitation.   Cut to four years later the group is now a big act performing in Las Vegas.  As a part of this act they pull off a bank heist in Paris while on stage.   This stunt gets them under investigation with by the FBI agent played by Mark Ruffalo --is in intent on catching them in the act.

This movie does a great job of mixing the world of Magic with a heist movie.  The movie was interesting and entertaining and had you guessing the whole time trying to figure it out. Like a Magic act it was full of red herrings and misdirection.   It also had a mysterious element of a secret society as a part of the plot which gave it additional depth.    I don’t feel like I can really go on to discuss the plot for fear of spoiling it.  The film wasn’t spoiled for me so I don’t want to spoil it for anyone else.     I’ll just say that I really enjoyed the film and I’m looking forward to the sequel, which I hear is in the works.
The cast was excellent:  Morgan Freeman, Michael Cane, Woody Harrelson,  Isla Fisher,  Jess Eisnberg  and Mark Rufallo.  The magic acts were cool and the action scenes were exciting.
I actually enjoyed the heist aspects of this film more than all of the Ocean’s eleven sequels –only the original from that series did it better in my opinion.
I can see how some people will be upset at the end of the film and complain about the twists and turns the film takes and how they don't buy it.  I choose not to overthink it and just enjoy it for what it was --a fun and magical heist movie  - but I can definitely see how the films resolution will leave many cold and unhappy with how it concludes.