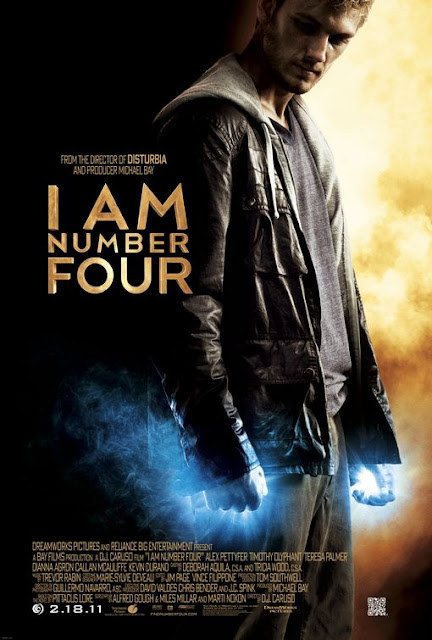 This movie basically takes the concept of Superman and mixes it with Buffy the Vampire Slayer.  Nine teens that were the hope of their dying planet Lorien have been sent to Earth with protectors to keep them safe until their special abilities reveal themselves.  They are being hunted down by an alien race called the Mogadore and are being killed off in order.  This movie follows Number 4 as he struggles to survive after numbers 1-3 have already been killed over the years.

Number 4 has just moved from Australia (where he was starting to get noticied) to a small town in Cleveland called Paradise with his guardian Henri.  Henri is played excellently by the always entertaining Timothy Olyphant who is basically the Obi Wan character to  Number 4's Luke Skywalker.    While in this small town Number 4 befriends a nerdy character that is being bullied at school and falls in love with a girl --just as his powers start to reveal themselves.  Meanwhile the Mogadore, which look like some cheesy villains from an episode of Buffy or Angel are tracking him down.  The villains were laughable --but it all made sense after I watched the movie because it was co-written by ex-Buffy Producer Marti Noxon.    Despite the silly villains and the lame bully storyline the movie gets good as the Alien hunters finally track him down and some cool and interesting battles take place.  Number 6 played by some cute Australian girl shows up just in time to help save him and they are able to fight off the evil aliens and by the end of the film set off to find the others of their kind. The remaining Loriens are going to need to band together in order to protect Earth.

This movie was based on a series of books that deal with these Super beings written by authors James Frey and Jobie Hughes. Like several book series recently it was meant to be a series like the Harry Potter's,   Hunger Games and Twilight's of the world.  Hollywood wants franchises and if the first movie doesn't make enough money --many of these potential franchises don't make it past the first movie --which is a shame.   I'll blog about theses franchises that didn't get off the ground in my next blog.   I Am Number 4 was obviously meant to be one of these big money making franchise --but it didn't quite happen.   So instead we are left with this cool movie and interesting story that is obviously meant to continue and never does.    Maybe this series could and should come back as a TV series the same way the original Buffy movie eventually came to the small screen.   I liked the movie and the direction it was going --but maybe it was better suited to the small screen instead of being expected to be the next Twilight at the box office.