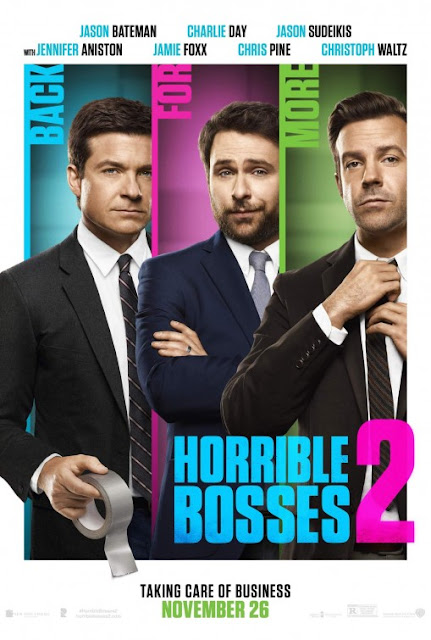 A lot of sequels are made just because the first movie made a lot of money.  Hollywood doesn't care whether a sequel is necessary or not just whether it could make money.  As a result of a bunch of movies that really don't lend themselves to sequels get them anyway --whether there is a story to tell of not.   The worst example of this was Miss Congeniality.  Arguably the first one was actually pretty good --but the second one was absolutely uncalled for and unnecessary and was actually quite terrible and unforgettable as a result.  Horrible Bosses 2 was an unnecessary film --but it was still actually pretty good.
Horrible Bosses was a solid sequel despite a less interesting plot than the first one.    It proved that an unnecessary sequel can still be good when the level of the talent is good.  The cast chemistry of Jason Bateman, Jason Sudekias and Charlie Day make this movie enjoyable.
The original movie featured three friends that all worked for terrible bosses that decide over drinks that if they killed off each other’s bosses their lives could be better.   A crazy and implausible plot that goes horribly wrong.   Think Strangers on a Train meets the Three Stooges.  In the sequel they have gone into business for themselves and get screwed over in a ruthless business deal that causes them to lose everything.    So of course they decide to kidnap the guy's son to get their money back.   Again a very misguided and unbelievable decision that once again goes terrible wrong.
The best part of the movie is the chemistry of the three main characters.  They work so good and compliment each other so well.   A perfect example of this chemistry is in the scene where two characters are breaking into the dentist office to get laughing gas for their upcoming kidnapping attempt and are communicating with Jason Bateman’s character via Dora walkie talkies and keep mentioning his real name.  This scene has some great dialogue as the characters try to come up with code names mid crime.
If you liked the first Horrible Bosses then you will most likely enjoy the sequel as well.