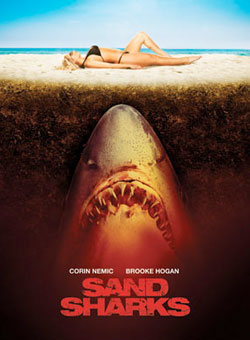 Damit!........I should have written this movie 4 years ago....I watched too many crappy shark movies for nothing.....All that research down the toilet.    Someone else made --- kind of the movie I wanted to make ----after watching bad shark movie after bad shark movie.    Okay so it wasn't exactly the movie I had in mind.....I mean I guess this was a comedy?? (Mine would have been the bloodiest all out comedy Shark movie ever)   .   It had many of the shark movie conventions that I wanted to make fun of...like the "Jaws Scenario" that I talked about in my orginal blogs on the subject matter.    They did part of the concept I had envisioned ---but they didn't go over the top enough.  In a world with Monster of the week Giant creature features you need to go really over the top to make it different or turn it on its head......Once you get past the fact that the sharks swim in the sand it just becomes no different than ever terrible bad sci-fi shark movie.     This bad Shark movie stars Hulk Hogan's daughter  and Corin Nemec   and ends up being basically a bad Tremors rip off.
It thinks it is funny but fails and becomes boring instead.

The poster for the film  is excellent as it parodies the Jaws poster.....Too bad the movie isn't what it could have been.......Maybe I should thank this movie for being made....Maybe it saved me from making the silliest, bloodiest, worst shark movie ever ......I guess the world will never know.

Here is a link to the some of the  research I  started years ago   into bad shark movies   when I wanted to write the ultimate Bad Shark movie comedy.
http://bradgeekness.blogspot.com/2011/06/shark-movies-research-movie-reviews.html