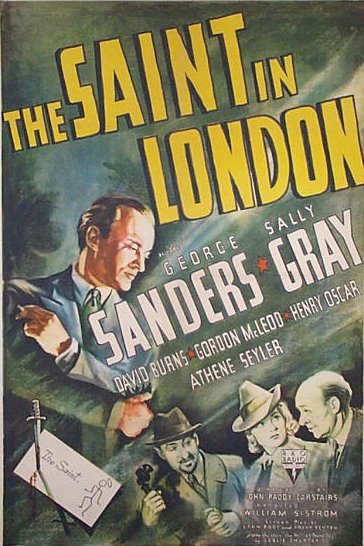 I was aware of the TV show with pre Bond Roger Moore,  I didn't know there was a series of movies back in the 1930's --1940's.   This British Man of Mystery  has style and a confidence in no matter what situation he gets himself into.   The movie was sleek and fun with a short running time.   Sanders was perfect for the role and  I look forward to seeing the other entries in this series.  He starred in 5 Saint movies before moving on to another great character in the Falcon films. In The Saint in London Simon Templar (AKA the Saint) unravels a mystery that involves currency fraud and murder.

Murder Mysteries of this era generally have a short running time that is just over and hour so to the modern viewer they have the feel of a TV show.  If you enjoy old school Murder Mysteries give the Saint Movie series a try.  It is like watching a Netflix series these days with 8 films in total not a huge time commitment.