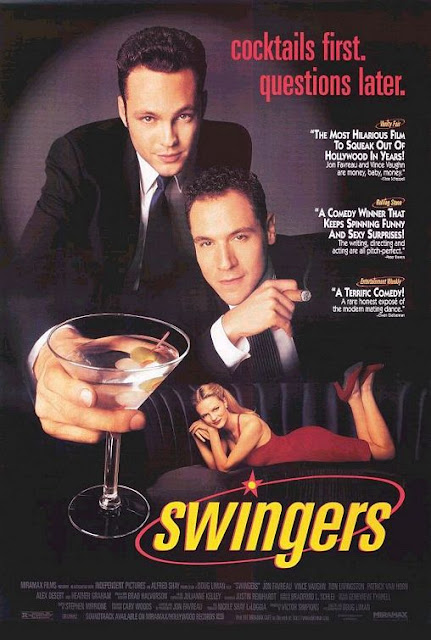 I revisited Swingers for the first time in many years since Kim had never seen it and it was playing in this little retro wine bar in Solvang a few months back.   Swingers is all about hopeless single Mike (played by on Favreau) --who is tying to deal with a breakup of a six year relationship and get back out there again.   He dives into the retro cool LA nightlife with the help of his buddies that include a younger skinnier  Vince Vaughn and Ron Livingston that keep trying to tell him how Money he is.  Mike struggles in  the singles world of Swing music and hip LA parties and retro hangouts....that are perfectly set to a great soundtrack.   Mike's desperate search to get over his ex is filled with great witty dialogue.   The movie is worth watching just for the scene where Mike ends up calling a girl he just meet at a bar  an hour later after being told to wait at least 3 days before calling.  He leaves a series or desperate messages that scares the girl off before they could even have a date.