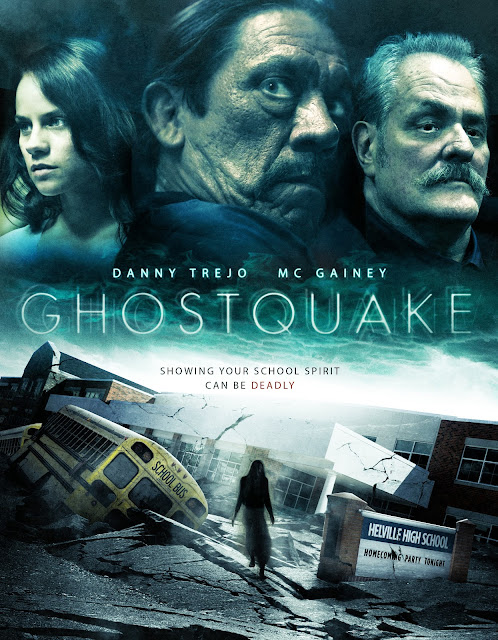 Haunted High...aka Ghostquake 2012  SO bad its good.
Starring Danny Trejo (well sort of) and featuring Charisma Carpenter....(for about 1 minute).  I decided to watch this movie for Charisma Carpenter since she was one of my favorites from her days on Buffy and Angel and even her guest spots on Veronica Mars.  Well she was only actually in the movie for one scene which didn't end well for her character.  The movie by Active Entertainment was horrible....I mean really bad ---the dialogue was bad....the story was bad.....the acting was terrible especially the super sweaty fat guy with the bowl haircut.   A really cheesy bad horror movie about a demonic ex headmaster of this school gets unleashed from a demonic coin and terrorizes the school with corny lines and silly death scenes.  Still upset over being fooled by Charisma Carpenter's actually not really being a part of the movie....I quickly went to commenting about how bad the film was....then it turned the corner ......The magical corner where a film becomes so bad that it is enjoyable....The scene that crossed the mystical border into SO bad it is good....The dead dissected frog attack.   "What the hell was that?"   "Franken Frogs".... and from there the cheese continued to please.....The music teacher has a cheesy battle with a suit of armor and is crushed by the bleachers...His music student that has the hots for him is tricked by a ghost of him taking a shower and wandering into her death after a cheesy line.   The acting in this movie is Troll 2 level...not sure if that was on purpose or whether this movie was just that bad.

Email ThisBlogThis!Share to TwitterShare to FacebookShare to Pinterest
Labels: Ghostquake, Horror movies, SO BAD it's good