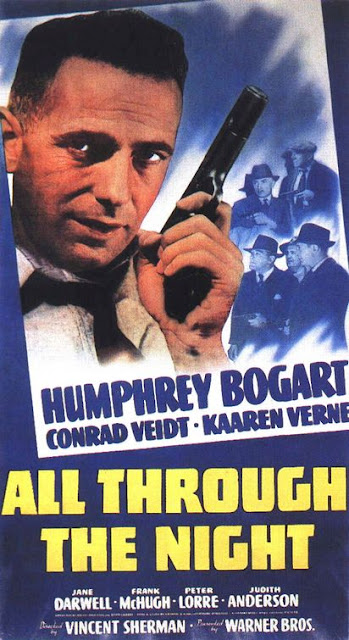 All Through the Night  1942   8+ 0ut of 10
A great 1940's movie about a NY Gambler who gets involved in and uncovers a deadly web of spies  as a result of his favorite cheesecake baker getting killed.   (His character supposedly had cheesecake for several meals a day....The cheesecake diet and yet isn't fat ---go figure....but the story isn't really about cheesecake.)

The film is Humphrey Bogart at his best in a fast paced, action packed and comedy infused murder/spy adventure.   There are numerous gun battles and chases and even when the film takes a minute for a bit of dialogue the dialogue is well written and interesting and moves the movies along.   The cast is littered with talent --that includes the always interesting Peter Lorre and many other great actors of the time period.    I had honestly never even heard of this movie before I recorded in on TCM one day.  I found it a much better Nazi spy movie than Bogart's own overly talked about Casablanca---which is overated in my book.

Email ThisBlogThis!Share to TwitterShare to FacebookShare to Pinterest
Labels: All Through the Night, Humphrey Bogart, Movies of the 1940's