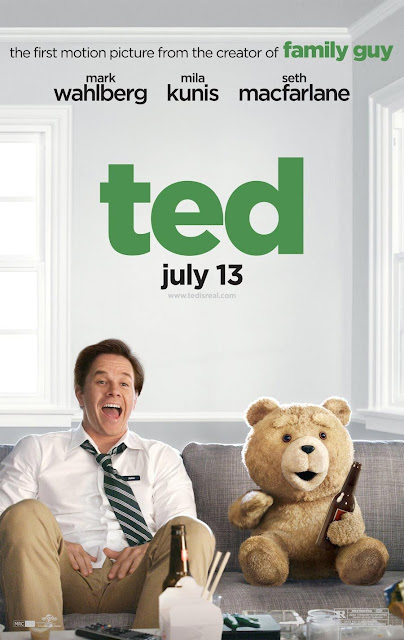 Ted 2010  6 out of 10
What would happen if as a kid you made a wish that your Teddy Bear was real and that wish came true?   What if the same  magical thing happened, but it was from Seth Macfarlane's point of view?
That is what you get with the movie Ted.   It is Teddy Ruxpin meets  Meet the Feebles.   The cute Teddy Bear has grown up with Mark Wahlberg's character and is now a foul mouthed pot smoking old Teddy Bear that is getting in the way of the main character being able to grow up and have an adult life with his girlfriend played by Mila Kunis.    The movie was an odd thing to watch as the foul mouthed Teddy bear drinks and hangs out with hookers and Flash Gordon.  It had an occasional funny moment here and there,  but wasn't as funny as a normal episode of Family Guy which Seth MacFarlane is the creator (and half the voices for).  It was another example of a movie where all of the best scenes were in the trailer.     I would rather watch a half and hour with Peter, Stewie and Brian than follow the adventures of Ted the bear---so in that respect the movie failed a little bit for me.