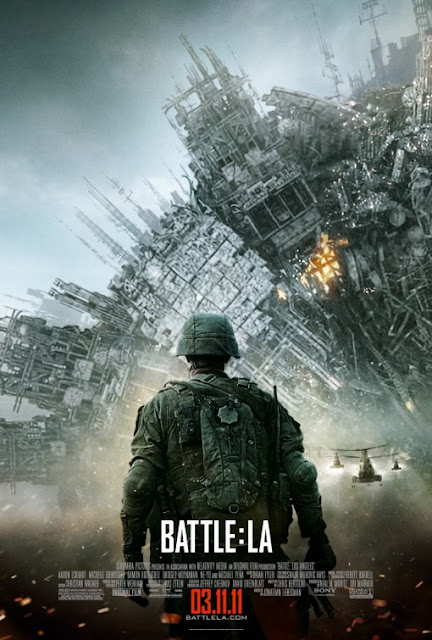 The aliens are trying to invade the earth yet again.....in  Battle: Los Angeles.   They have landed and are taking over Santa Monica and a group of marines are sent in to rescue some civilians.   The movie stars Aaron Eckhart as a Staff Sergent that is about to retire while still trying to deal with a bad mission where he lost all his men.   Well he gets a chance to come to terms with this old mission by having to take on a bunch of alien invaders.   The movie is based very loosely on a mysterious case from World War II which was called the Battle of Los Angeles where a bunch of shots were fired over Los Angeles. Well this battle over Los Angeles is all out war against an aliend invader.  The movie plays out like a fairly good war film with the enemy just happening to be aliens.  Of course the Aliens that can travel all the way to Earth have a simple way to be defeated as usual just like in Independence Day....a command and control which if taken out defeats their entire air support.....Unlucky!   Aliens can never figure out such simple things....You think they would have learned from all of the previous failed attempts to take over the world. The aliens from  War of the Worlds  were defeated by germs. The aliens from the movie Signs were allergic to water???  (which makes landing on a planet that is 70% water the dumbest move ever.   Despite that it was a better film than expected and clearly better than the direct to DVD rip off Battle of Los Angeles.