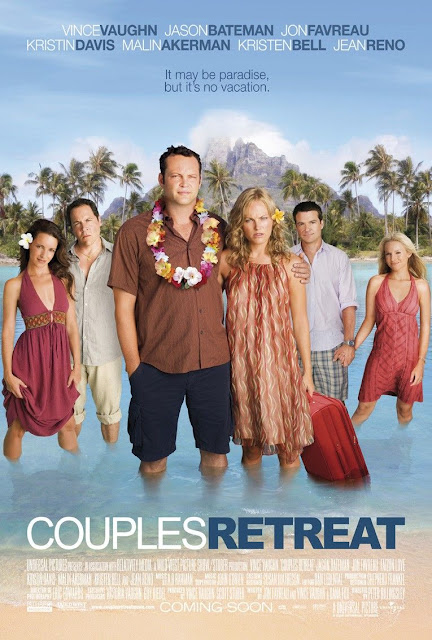 Couple's  Retreat 2009    9  out 10
This is an example of one of those comedies that the first time you see it is pretty good and then you catch it again and like it more each time.  The movie focuses on four couples that all go on vacation together on a tropical island of Eden.  The one couple that convinced them to go is on the verge of breaking up (played excellently by Kristen Bell and Jason Bateman).  They couldn't afford to go on their own, but got a great group rate,  which they convince the other couples to go for the snorkeling and jet skiing.   Of course once they all get there they find out that the couples therapy is a requirement of their stay.  Vince Vaughn is at his best in this film with the great throw away lines and comments and the story about each of the couples is fun to watch.   I've found myself drawn into watching this again when it airs on TV to see certain scenes and dialogue and it has grown to be one of the few comedies in recent years that I have liked enough to watch multiple times.
The cast is perfect and the story is entertaining which is something I think is rare in most modern comedies.  Check out the trailer and rent this one.
Posted by brad chowen at 2:59 PM