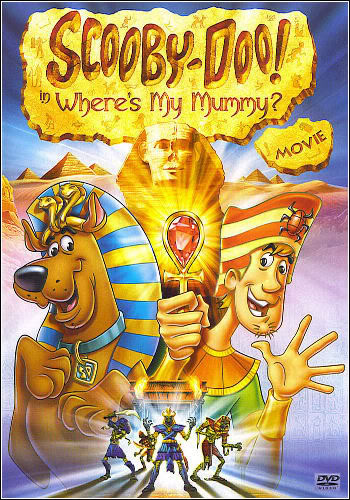 Scooby Doo can always be counted on for a fun family adventure. There is always a mystery to be solved which drives the plot and there is generally some good fun action and laughs along the way. Scooby Doo Where's My Mummy is just another example of why Scooby Doo has lasted and endured for so long over numerous TV series and Direct to DVD movies and even some live action adventures. With a few exceptions Scooby is always up to the challenge of helping to solve some crime or mystery in his own special way (which usually involves running away and eating all the food in sight). This particular mystery involves an Egyptian curse and the Sphinx. Velma is working on an Egyptian dig and the gang shows up to visit her and of course gets involved in a mystery. The story of Scooby Doo is generally in the same formula something or someone is trying to scare everyone away for some reason and the Scooby Gang isn't about to leave until the mystery is solved and the monster is unmasked. This Scooby adventure had some really good action adventure and supernatural elements that made me think of the underrated Disney Atlantis movie and the TV series based on that movie that never happened (with the exception of 3 episodes that appeared on DVD). Undead warriors from the tomb of Cleopatra add an element of fun and some references to one of my favorite old Scooby Doo episodes from the original TV show were used in this movie as well. This movie would have been a 7 out of 10 if it hadn't been for the surprise ending which I didn't much care for. I think they were just trying to be different for some reason. If you like Scooby Doo you will probably like this Scooby adventure as well even if it isn't one of the best.