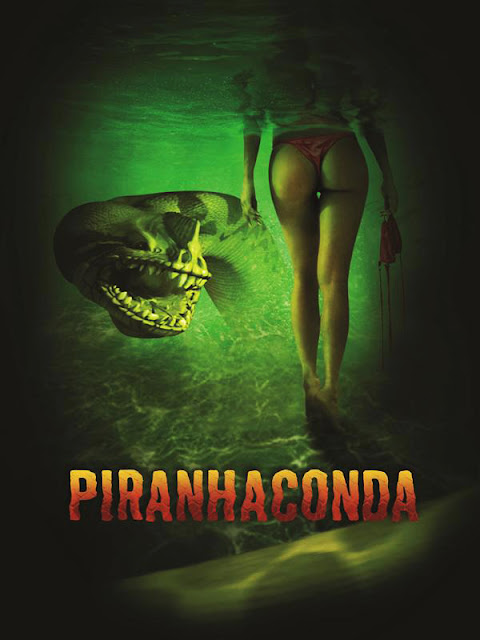 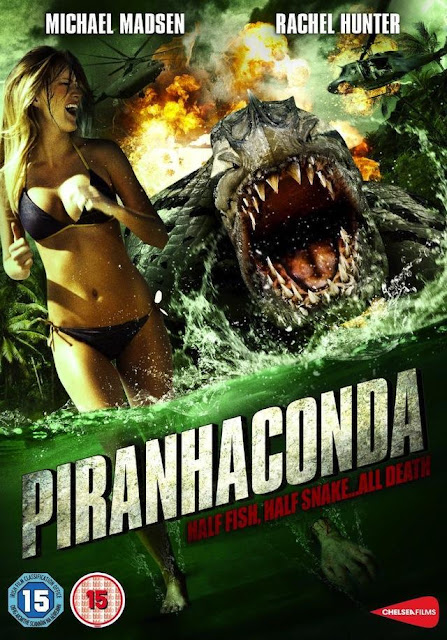 Great posters....right up there with the much worse 2 Headed Shark Attack.  You have to love the tag line " Half Fish,  Half Snake.....All Death".   Well at this point if you have seen one giant digital snake movie you have seen them all.  This one takes place in Kauai where a C horror movie is filming.  Of course there is a scientist that wants to study the giant snakes eggs at the cost of human lives (for science) played by Michael Madsen.  Well the Giant Piranhaconda doesn't like this so much and starts eating everyone in sight including the film crew and the bumbling kidnappers that decide to capture the film crew to hold them ransom.   The dialogue is terrible and laughable as usual.  A great example is when one of the kidnappers yells to his men "Shoot them in the ass" (because they want them alive).   Anyway the Giant  CGI Piranhaconda chases and kills everyone in a silly digital spray of blood while former model Rachel Hunter stands around doing nothing.  The film crew escapes the kidnappers and flees from the giant snake creature while  Michael Madsen's character tries to give us important scientific info about the creature mid chase.   The creatures nest area is right next to a waterfall that I swear has been used in at least 4 bad Sci-fi creature movies I've seen before (at this point I think it is safe to say ---don't go swimming near waterfalls a giant creature is sure to eat you if you do.)   As bad as the movie was it was still watchable---which I can't say for some of the other giant creature sci-fi movies.
If you like giant digital snakes --then this is about in line with all the other ones.

Here is the trailer for the film......"Remember nothing bad ever happens in Hawaii"    NOT