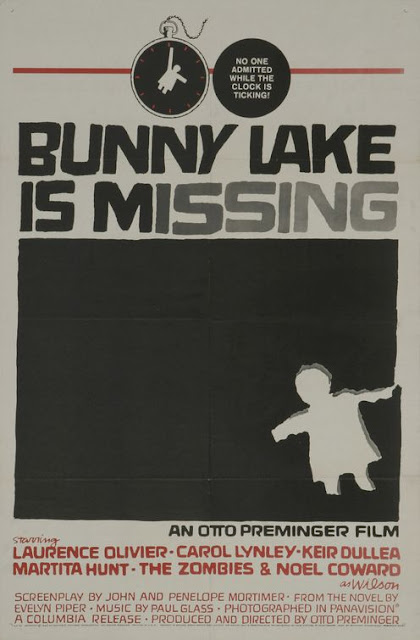 I first heard about this movie after watching and reviewing the movie Flight Plan starring Jodie Foster (which didn't work for me)
You can see my thoughts on Flight Plan from 2005 below
http://bradgeekness.blogspot.com/2012/01/flight-plan-2005-4-out-of-10-more-holes.html

The idea for Flight Plan was interesting it just wasn't well executed in that film.  Bunny Lake is Missing from 1965 did a much better job with the theme.  The story follows a woman  (Carol Lynley) who reports that her daughter is missing. A  Scotland Yard Detective  is brought in (Laurence Olivier) to try and find the girl.  As the movie goes on the question of whether the girl exists at all comes into question.   There are some interesting characters and strange dialogue that give the film a creepy film and I like how it was filmed by Otto Preminger  It is a strange Twilight Zonish type film that has some interesting turns and will keep you guessing til near the end.  I really liked this film and would have given it a 9 out of 10 had the ending not dragged on a bit too long.   But it is definitely worth giving a watch is you are into Twilight Zone style mysteries.

Here is a trailer for the film