I just recently caught both Cats and Dogs and Cats and Dogs: The Revenge of Kitty Galore on the HUB channel with the family.  Both are quality family movies. 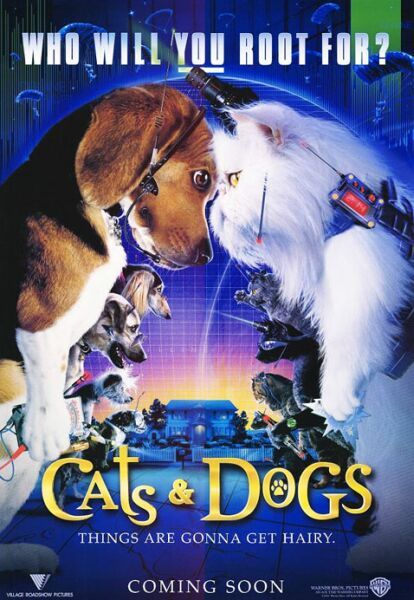 Cats and Dogs is basically a Men in Black  or Spy Kids with talking animals.
Like Men in Black there is a secret world that Cats and Dogs live in that we as simple humans are completely unaware of.   Jeff Goldblum's character is working on a cure for dog allergies and the Cats are not too happy about that so the movie centers on the Cats trying to steal this cure and the Dogs (the good guys--I'm a dog person so I totally agree with that) are trying to protect it.The  movie had a  lot of action and humor as the Dogs and Cats do battle especially in the showdown with the Russian spy cat and the too main dogs.   The spy concept of the movie is great and the movie was a fun for the whole family. 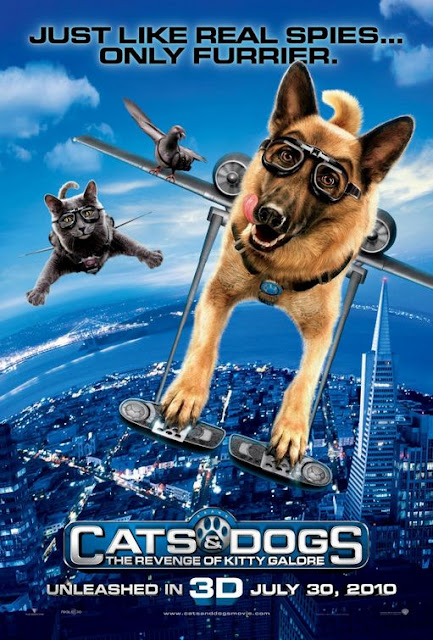 The sequel  Cats and Dogs: The Revenge of Kitty Galore 2010  was a quality spy adventure that had a lot of fun parodying the Spy genre.    I'm surprised it took this many years before a sequel was made.   The title alone is a great  nod to the famous Bond Girl.  A funny twist on the villain was instead of a bald main holding  a fluffy white cat---we get  a bald cat with holding a white mouse.  The story line was good introducing the aspect of the Cats and Dogs having to work together to stop this villainous Feline.
The action sequences were fast paced and thrilling.
Together the films make a great double feature for a family movie night.

Cats and Dogs: The Revenge of Kitty Galore Trailer