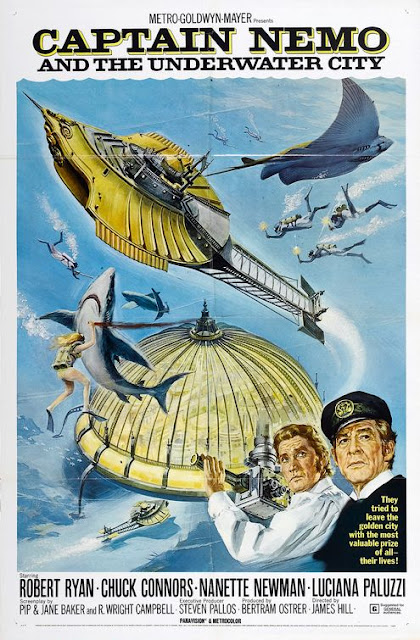 Survivors of a sinking ship are rescued by the infamous Captain Nemo and taken to his fabulous color filled golden underwater city where they will not be allowed to leave.   I can say one thing for the film...they knew that they were shooting it in color...the set design and costumes were wild.  Some people dressed like Willa Wonka meets the Wizard of Oz .   Scuba suits that look like they were made for the band KISS  or Evil Knievel.   The movie itself was nothing to get excited about.   Replacing the giant squid from 20,000 Leagues under the Sea this time around we get a giant Ray.   50 minutes go by in the movie before anything even remotely interesting happens and not much else of excitement happens after that again until the end...   It felt more like a tour of Nemo's world than a well structured movie.   Not one of the better Verne inspired films