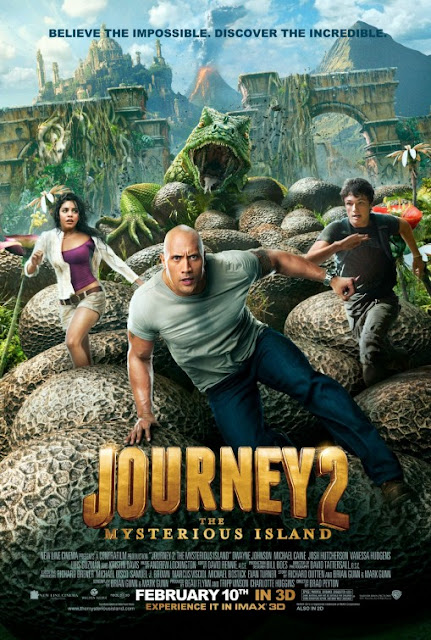 Journey 2: The Mysterious Island   2012  8 out of 10   is a action adventure family film that focusing on a  17 year old boy (Josh Hutcherson) and his   search  for his missing grandfather with the help of his step dad ( Dwayne the Rock Johnson).  He decodes a secret message that takes the 2 on a wild adventure to The Mysterious Island from Jules Verne's book, while bonding in the process.  They actually find the mythical place and his grandfather and  few extra surprises along the way with the help of an island hopping helicopter pilot  (the comic relief) and his daughter (the love interest).

The Rock is great as the step dad....he is the Arnold of this decade of action movies and shines even in these more kid friendly roles.   Michael Cane is also well cast as the adventure seeking grandfather.   The visuals in the film are fun and vibrant....even when they borderline on silly.   Despite some serious plot issues  with the film it was a fun and enjoyable ride...Kinda of a kids introduction into better adventure  films like Indiana Jones or Pirates.