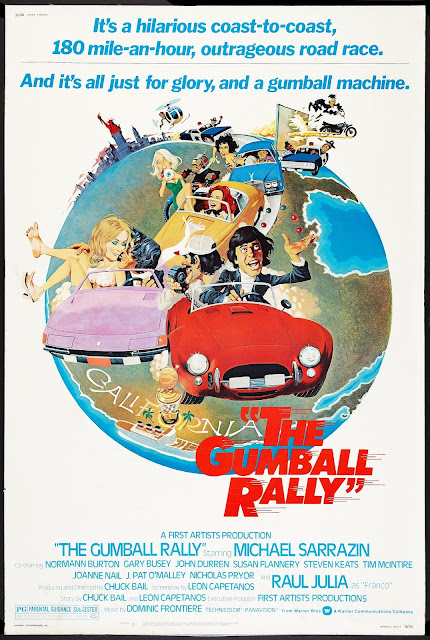 A group of drivers take part in an illegal cross country road race.
The movie was inspired by an actual race called Cannonball Baker Sea-To-Shining-Sea- Memorial Trophy Dash.  This race inspired several films including Cannonball also 1976 , Cannonball Run 1981 and it's sequel.  The official tagline heads  " It's a hilarious coast to coast, 180 mile an hour,  go -for- broke, outrageous road race with the world's most  expensive cars. And it's all just for the glory and a gumball machine"    The problem for me is that I found the film neither hilarious or outrageous at any time.  As a cross country road race type film it may have been one of the first.....But definitely for me doesn't stand out as one of the best.  It was a decent film--but was really missing the humor that the poster suggests and that later similar films pulled off.  And other than a section where a couple cars raced down the water channel....the racing wasn't all that interesting either.

If you are a fan of this style of film it may be a rental---but I'd watch of the other funnier road race films first.