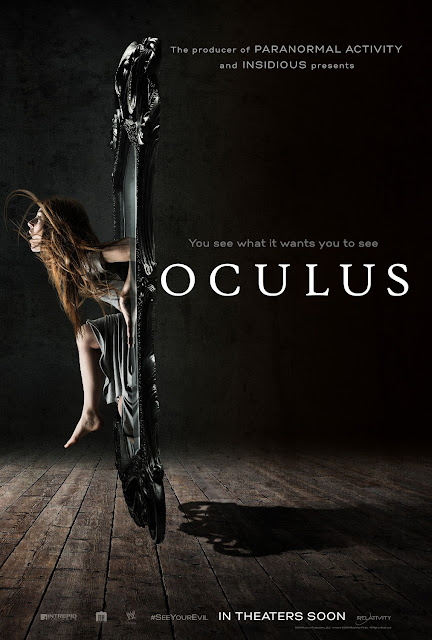 Oculus is a supernatural psychological horror movie.  It stars Karen Gillian (Nebula in Guardians of the Galaxy)  and Katee Sackoff (Battlestar).    The film centers around an old and mysterious mirror that apparently brings death to everyone that owns it.   The film is just creepy.  It brings back the uneasy feeling I had the first time I watched Prince of Darkness by John Carpenter with that weird message.  The film focuses on two kids that have grown up trying to keep a promise to destroy the mirror after an incident when they were younger that lead to their parents death.   The daughter played by Karen Gillian has researched the mirror and found a trail of unexplained death and mystery around it.   She sets up a test with video cameras to see what the mirror will do.  From here things slowly start to ramp up as we see flashbacks to what happened to their parents and strange things that start to happen to them.

The movie does a great job of flipping back and forth between when they were kids and their parents played by Katee Sackoff and Rory Cochrane were effected by the mirror.  The intersecting of the two story lines can be both a little confusing and yet enjoyable at the same time.   The power of the mirror creates a situation where both the characters and the audience can't trust what is and isn't real.  The movie is a descent into madness.  I didn't know how I felt about the film at first --but the fact that I wanted to know more about the mirror made me realize it was more effective than I first thought.

The movie is based on a low budget short film that called Oculus: Chapter 3- The Man with the Plan...that the director of the film did previously that I know want to check out as well.

If you are looking for creepy and weird give this film a viewing.

Here is a trailer for the original short film