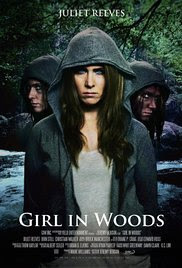 Girl in Woods is a psychological horror film about a girl named Grace that ends up lost and alone in the mountains after a tragic accident where her finance accidentally shots himself......or does he?  Grace's struggle is not only in being lost in the forest, but also mentally in dealing with demons from past tramatic events.    Much like the movie Oculus (which I recently watched) this film is a journey into madness.   The movie flips around between present and past events and the viewer is left with no idea of what is real and what isn't.  It could have been a more interesting movie- but instead it becomes dull after ahwile.  Not only is the main character of the story lost in the woods- but unfortunately the viewer is lost as well.

What is real?  What is just her imagination?   It is all blurred to the point that by the end I just didn't care.  Unlike Oculus which had an interesting premise that made you want to know more, this movie just made me want it to end.  The acting itself was good --but the plot was just underwhelming at best.