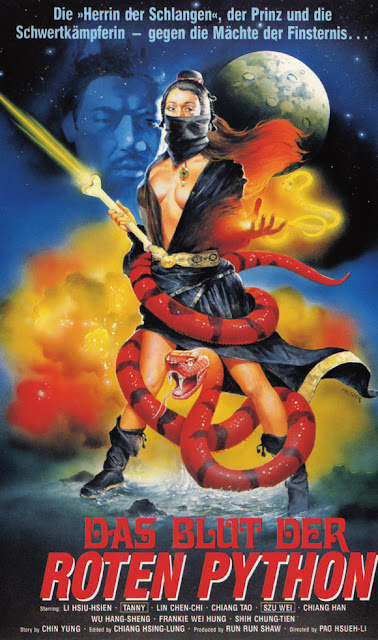 I've seen quite a few Kung Fu movies from back in the day with there bad American dubbing --but this one has to be one of the stranger ones.  Think basically a Kung Fu movie from 1977 that is like a low budget Clash of the Titans.   This was definitely a strange movie.

Back in the day Kung Fu movies could be found on random obscure local TV channels.  Now the El Rey Network on cable is a go to spot for old school Kung Fu.  The Battle Wizard follows a heroes journey of a young man who is searching for knowledge and more interested in books and has no interest in Kung Fu (How dare he).   He goes in search of the mythical Red Python which can grant him powers.    Along his journey he encounters a women who fights with Kung Fu snakes.  Some guy that looks like Mel Brooks Yoda from Spaceballs if he had a lobster claw hand and bad dental work and a mysterious veiled woman that can shoot lasers out of a prop bone.   The special effects are laughable.  The Kung Fu action so-so at best.   But if you were looking for a Kung Fu movie where the hero fights and battles a giant rubber snake like a scene out of an Ed Wood movie this is the Kung Fu movie for you.   If you want to see the hero thrown into an underground tunnel and forced to fight a guy in a store bought gorilla costume in a kung fu battle ----this again is your Kung Fu movie.

The movie was poorly edited as scenes seem to just jump to other scenes with little or no connection -but again it has a Kung Fu Gorilla.

If you like strange and bizarre Kung Fu movies---this one is short enough to give a try just don't expect amazing fight sequences and enjoy the cheap laser effects and KUNG FU Gorilla.