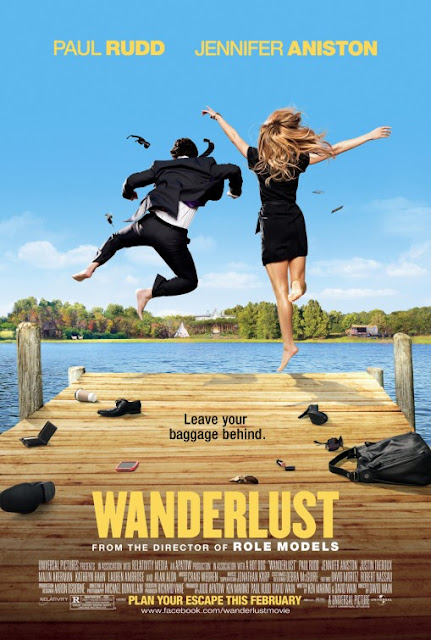 Wanderlust 2012.   George and Linda are both out of a job and can no longer afford the tiny little micro loft they just bought in New York,  so they take off for Atlanta so George can work for his asshole brother.   That doesn't turn out so well and so they decide to return to this little hippie commune that they got stuck in on the way there.  The movie is basically a Lost in America that instead of following  this better films format gets mired down in bad hippie jokes.  The film has a great cast that stars two of my favorite actors.  The always beautiful Jennifer Aniston and solid performer comedy performer  Paul Rudd.  The cast also features many of  the old MTV sketch comedy show The State.   Unfortunately for me the cast gets wasted figuratively and literally in this story at the hippie commune they get stuck in and try to embrace on their journey.  If you are fan of the cult classic Wet Hot American Summer --a cult classic also written by David Wain that came from The State as well you will probably like this film as well.   For me  the movie  just fell flat as the story went from one hippie drug joke to the next, not my cup of tea.