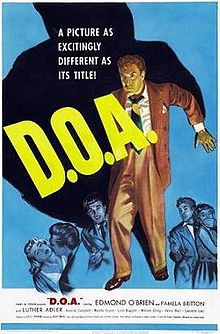 D.O.A. from 1949  is a solid Film Noir movie that follows an Accountant's search to find out who poisioned him before he dies.  The pacing of the film and its dialogue matches the main characters urgency to solve the puzzle quickly.   The movie starts with the main character stumbling down the hall of a police station   where he is revealed to report a murder.....His own murder.
The film then backtracks over the past day to unfold how it happened.  As each piece of the puzzle is revealed he gets closer and more desperate to solve the crime as time is his enemy.
The film was later remade in the 1980's with Dennis Quaid.

It can be found on this set of Film Noir movies.