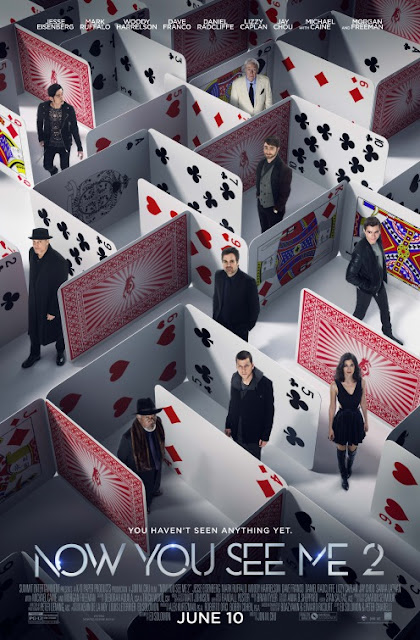 
This is a strange review because I because I liked Now You Can See Me 2 despite its flaws.

It wasn’t as good as the original, which was a real pleasant surprise.  The original movie was basically a heist/mystery film with Magic.  It was clever and had a fun twist and the ride to the twist was entertaining.  The Four Horsemen were basically like a bunch of magicians turned Robin Hood’s.  They would perform and amazing trick and then the storytelling method would let you in on the secret. The Four Horsemen pulled all of this off while being chased by the FBI and a Magician that was trying to debunk them.

This sequel brings the 4 Horsemen back with one character replaced due to filming conflicts ( She was pregnant at the time and almost drowned filming the first movie) .  They have come back to pull another heist, but are foiled in the process by a mysterious person (Harry Potter anyone).  This starts a Cat and Mouse game with more twists and another strange ending.   I found this sequel an enjoyable ride although its flaws kept it from being as good as the original.

1.      What is up with Woody Harrelson’s twin brother?
That was an odd choice for the film.  At first I thought it was Matthew McConaughey –but instead it was Woody in a wig playing his own gay twin?

2.      A Lost Opportunity:   The first film ends with the Horseman getting admitted via a Magical Carousel into the secret society of The Eye.   It was a great ending that I thought would open up a possible sequel into Magic actually being real.  There are so many interesting things to explore in this secret society….But the sequel went in a different direction.  I wish they had explored these possibilities.

3.      Although the magic tricks were visually interesting -the trick involving stealing the micro chip was so unnecessarily over the top that it actually took me out of the film with its silliness.

4.      I agree with some reviews online that the twist takes away from the results of the first movie.  I think the producers wanted so badly to have the entire cast from the first film back that it limited their story telling and forced a twist that didn’t feel like a logical extension of the first film.


I definitely enjoyed it more than the reviews I’m seeing on IMDB,  but not as much as my Podcast co-host Andy Wenger who wrote a great poem about the film which can be found here on our Podcast.

Email ThisBlogThis!Share to TwitterShare to FacebookShare to Pinterest
Labels: Now You See Me 2. Heist Movie