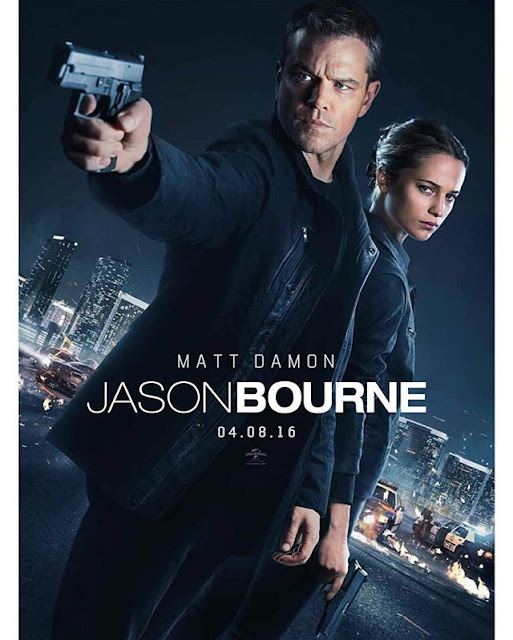 Jason Bourne is the most recent entry in continuing the series of Bourne films.

The cast for Jason Bourne is solid.   Matt Damon returns in this action packed film.  Tommy Lee Jones joins the cast as the Director that is trying to eliminate Jason Bourne.  Immediately comparisons to The Fugitive came to mind and made me want to watch that film again.  Alicia Vikander also joins as an agent who decides to  help him  for some reason.

My Issues with the Jason Bourne Franchise
The movie was exciting and entertaining on its own….but my issue with the Bourne series is that unlike James Bond who is saving the world Bourne just continues to try to solve his own personal issues and answer questions about his past.  So it feels at this point like nothing is really being accomplished.  You feel like you could literally start with the next movie and you really didn’t miss anything story wise.   Jason Bourne is almost a disposable film.
Fun to watch in the theater, but of no real consequence. The first movie felt like a fresh look at a spy film--but by this installment it just feels like the character just keeps doing the same things over and over again.   Avoiding people in crowds to stay under the radar and occasionally discovering a new piece to the puzzle of his life.


To listen to the PODCAST This is the place
http://www.superfantasticterrific.com/
Posted by brad chowen at 7:27 AM