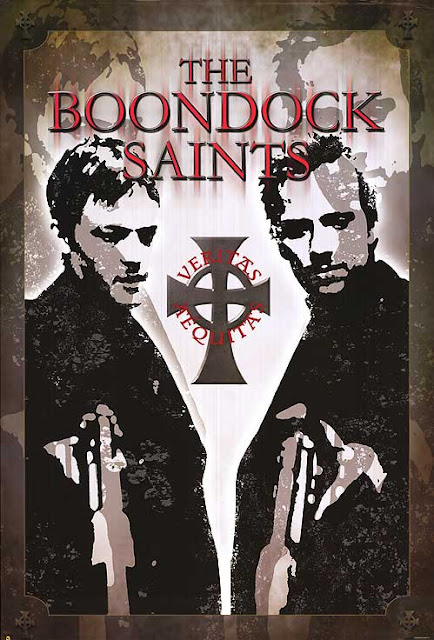 This crime film star Sean Patrick Flannery (Young Indy) and Norman Reedus (Daryl  Dixon on the Walking Dead) as  Irish brothers that get involved in a battle with mobsters.  I'd been curious to see this film a long time ago,  because I had heard good things about it and because of the films stars.  Last weekend it finally made it to the top of my Netflix queue.   The film was interesting because of it's non linear story telling style.  You would see a character run into a scene in a panic and then get to see the events that lead to that state.  It was a cool technique that lead to an interesting and fresh take on a crime story and some interesting action scenes.   Especially interesting was a scene in which the detectives tried to figure out a bizarre crime scene and then getting to see the outrageous scene that lead to that mystery.  The scene included Sean Patrick Flannery jumping off a roof and dropping a toilet on one of the gangsters.

The two Irish brothers end up involved with Russian gangsters and after dispatching a few of them in a bar fight --set out on a mission to eradicate all the scum from their neighborhood (Daredevil style).
One of their friends who is a bag man for the Italian mob is their comic relief and after being set up to be killed joins them in their action packed revenge crusade.  The movie had some good action and humor --but the character choice of William Dafoe's detective -took away from my enjoyment of the movie.  His character was just strange and out of place and where the director obviously wanted me to laugh at how weird and strange he was it actually just annoyed me took away from the main part of the story.  I think if that character had been taken out of the story it could have been told more effectively with less distractions from the better elements of the movie.

I may check out the sequel --but not right away--as I have a bunch of other films in my Netflix Queue to get to first.   I have heard rumors of a third film being made.  The probably reason for this is Norman Reedus and his new found fame from being on the Walking Dead.