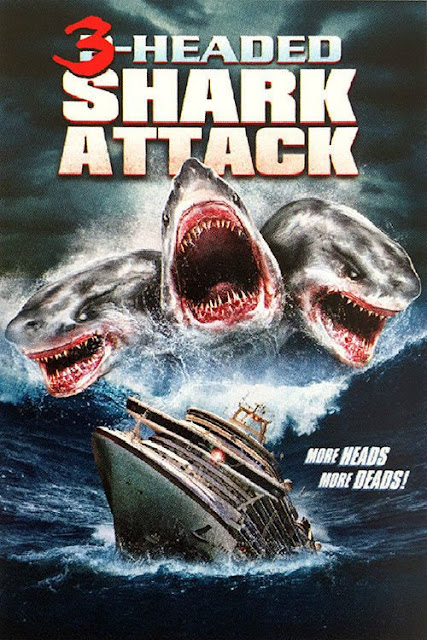 I guess Three Heads are better than Two.
The one thing I will give this movie --is that it was non-stop from the beginning to the end.  Just non-stop 3 headed shark carnage.
A mutated shark with 3 heads attacks a research facility that is studying the effects of garbage on marine life.   Well apparently the garbage --makes this shark grow three heads and start eating everyone in sight.  This shark is literally never full.

The movie should have been called "Let's swim for it" Or "I'll distract the shark".    "Let's swim for it"  is the worst thing you can say in a Man-Eating killer shark movie and over and over again this proves to be the case.  The story of 3 Headed Shark Attack is  a stupid movie, but the non-stop bad decision making of the characters and their insistence on "Swimming for It" and self sacrifice make it all worthwhile.

They escape the safety of the land by "Swimming for It" to a tiny boat.    Then later they "Swim for It"  again to get back on land.  Characters jump in the water to "Swim for It" to distract the 3 headed shark again and again after already watching it it everything in sight.   Why are these characters so willing to give up their lives?   Do they think they are in a video game and will just press start again.   They make it to a party boat that the shark keeps bumping people off of and into it's open jaws.  This shark can take down an entire party boat --but they keep trying to escape on smaller pontoon boats and fishing boats and keep "Swimming for It"

Danny Trejo is supposedly in this movie and yet only appears occasionally driving his small fishing boat in attempt to rescue the survivors.   (SPOILER ALERT).     He shows up just in time and using a Machete to chop off the middle head of the creature killing it.   (But wait there is still 20 minutes left in the movie)  Oh it isn't dead.   The creature makes a great recovery from death to eat him while he has a Deep Blue Sea  Samuel L Jackson moment.   The survivors then get on smaller boats (good decision)   They finally decide to try and lure the shark (now growing 3 more replacement heads for the one it lost)  back to the garbage area.   Supposedly they will confuse the shark into eating it's own heads because of the garbage.   This plan works but --not before a couple of more pointless sacrifices that include ex-wrestler Rob Van Dam.

Terrible plot and story:  Great effort at piling up as many shark kills as possible.   Almost SO Bad it was Good....but still on the bad side.
Definitely better than 2 Headed Shark Attack- 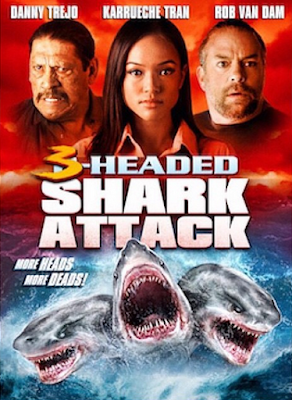