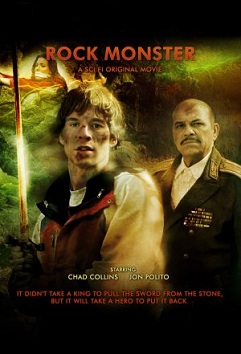 A college student is lured  to a little town in Europe where he has supposedly inherited a house.   Their bus breaks down and as they hike to the village they come across a sword in a stone.  The sword is pulled out of the stone by our main character but instead of becoming a king of something he unleashes a giant cheesy digital Rock Monster.   The movie plays out like a bad  episode of Hercules or Xena---but not as funny.  It is a silly movie from start to finish.   The movie even has a  Jaws moment --where the crusty old drunk general steps up in the town meeting to declare that they take on the monster.    So what we get from this point on is a bunch of cheesy corny acting, a Rock Monster stomping around while people shot bullets at it and our hero swinging his sword at it.   The movie should have embraced its level of cheese more fully and just gone for laughs.