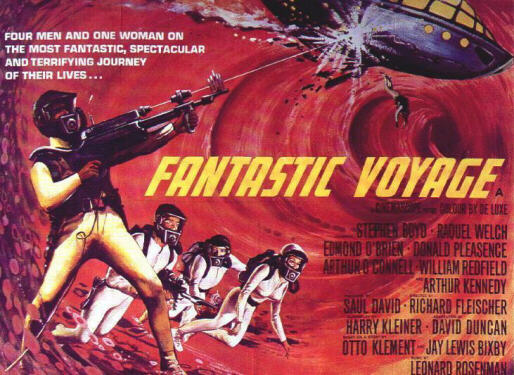 A great concept movie that was a precursor to a better more modern film  Innerspace starring  Dennis Quaid and Martin Short.  This 1960's Voyage into the human body in a miniature craft with a human crew now seems cheesy with its plastic ship and green screen backgrounds and odd sets -- but at the time it was made it was an adventure.  The crew of this miniaturized vessel must go inside of a diplomat's body  in order to save his life.
I s found this journey enjoyable if for no other reason than Donald Pleasance's performance as the (spoiler alert ) saboteur.  The film also stars Raquel Welch.   The movie takes a little while to get going as they detail the whole shrinking process so it isn't as  Fantastic as its title suggests --but it was still an  enoyable one with some good dialogue and colorful sets.