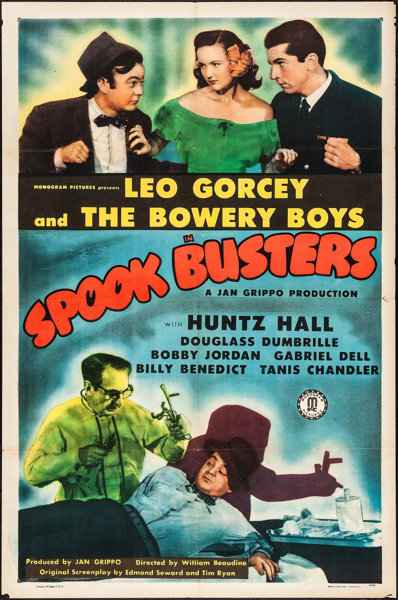 When I recorded this film onthe DVR to come back to later I had no idea that this was one of 48 films featuring these characters. . The characters in question are The Bowery Boys. They were featured in movies made from 1946 to 1958.  That is quite an output of movies.   They were a New York comedy group that come off as a little bit Three Stooges mixed with a little Abbott and Costello.

This particular film features the gang as exterminators taking a job at an old mansion.  At first they think it is haunted --but quickly discover that it is actually just a mad scientist that wants to scare them away.  He captures a couple of the gang and wants to use one the dim witted gang for a brain transfer with an ape.   I've come across the mad scientist haunted house with an ape theme many times in movies from this era for some reason.   I guess gorilla suits were cheaper to rent than creating monster suits.

The film is okay with some decent comic moments --but nothing the rivals Abbott and Costello level of humor.   I guess it is a good thing that I didn't fall in love with the film since then --I would have 47 more films to seek out.  I have a couple more of their flicks on the DVR --but some other stuff ahead of that on the need to watch list.

Email ThisBlogThis!Share to TwitterShare to FacebookShare to Pinterest
Labels: 1940's movies, Movies of the 1940's, Spook Busters, The Bowery Boys