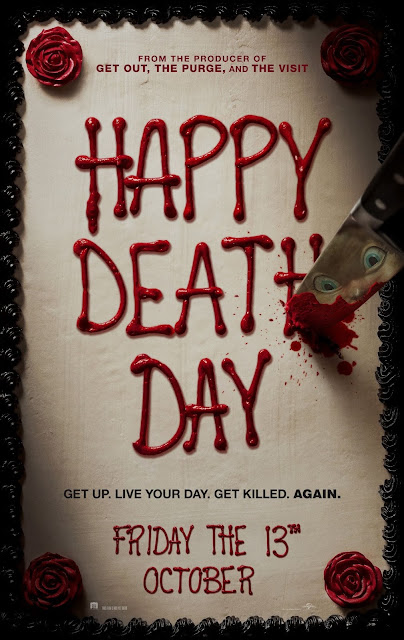 Happy Death Day is basically a horror movie version of the classic romantic comedy Groundhog's Day.   A love letter to that film mixed into the slasher movie genre.  The mix works surprisingly well and makes for an entertaining twist of a tired genre of slasher movies in the same way Scream did back in the day.

The film focuses on a college girl  (Tree Gelbman)  -the worst character name ever. She is trying to enjoy her birthday. She wakes up in a nerdy strangers room and goes about her day only to end up murdered at the end of the day.   She then wakes up and the day has started all over again.   So the film basically becomes about her trying to solve her own murder that keeps happening over and over again no mater what she does. This makes for a fun and enjoyable journey.

Just like in Groundhog's Day (which is the obvious inspiration for this film)  the character learns and grows as a person as a result of experiencing this day so many times.   The story had some fun little twists and turns and I'd definitely recommend this flick for fans of Time Loop stories or horror films with a little bit of comedy.