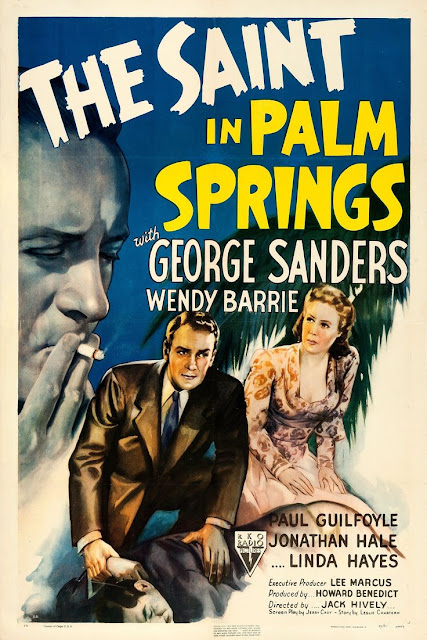 George Sanders stars again as The Saint in The Saint in Palm Springs.    In this outing the Saint is transporting some super valuable Stamps to a woman whose dad was murdered in attempt to get them.   The Saint must navigate the resort as several groups are after the stamps and not shy to murder in order to get them.  The plot was pretty simple with the main attraction of the film being Sanders cool style and presence.  In the hands of a lesser actor this film wouldn’t have been as enjoyable.  It included an entertaining sidekick for the Saint played by   as an ex criminal that is now a nervous head of hotel security that is trying to keep his nose clean until his probation is over.  It is sad that this was the last of The Saint films starring Sanders who would go on to star in the  Falcon series.

Email ThisBlogThis!Share to TwitterShare to FacebookShare to Pinterest
Labels: George Sanders, The Saint, The Saint in Palm Springs