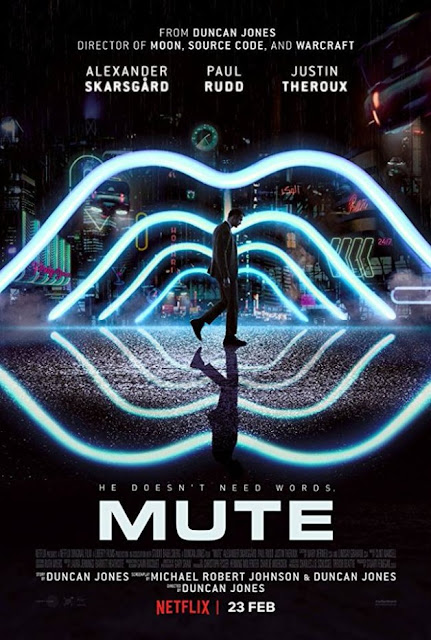 The trailer for Mute looked interesting.  I'd just watched Altered Carbon a Netflix tv show that heavily used the visual style of BladeRunner and for the most part enjoyed it and it's visual look.  Mute looked like a movie that would be interesting. The story of a Mute Bartender that seeks out what happened to his girlfriend after she disappears sounds intriguing.   It featured Alexander Skarsgard,  Paul Rudd and Justin Theroux so it had a good cast.
I was so wrong,  I literally had to endure Mute to get to the end.  Unfortunately the movie was a just a strange mess.  Just because you have flying cars, neon and rain --that doesn't make you Bladerunner.

The murder mystery aspect of the story was incredible dull.  A Mute man wandering around a sexually deviant underworld trying to ask questions without being able to talk didn't work.  Paul Rudd and Justin Theroux's characters were just odd and at first their scenes just seem like they were put there just to try and have some type of interesting dialogue.  They seem to have nothing to do with the main plot at first.  It quickly becomes clear early on that somehow they are involved in the disappearance of the Mute bartenders girlfriend.  If they aren't the killers then there is no reason for their characters to exist in the story at all.  This takes any sense of mystery out of the story.  It is apparent from early in the story that the angry Mute (ex amish) bartender is going to have a showdown with them at some point.   I also I found the subject matter in this seedy underworld obnoxious.   I literally thought about giving up on the movie about an hour into it.  I struggled to get to the end.

Apparently it took 16 years for the director Duncan Jones to get this movie made.  Maybe there was a reason that it was so difficult to get this movie made,  because it was just a difficult watch.   I definitely wouldn't recommend this film.  So far it is the worst movie I've watched in 2018 (of course the bad shark movies of the summer on Sci-fi haven't come out yet).