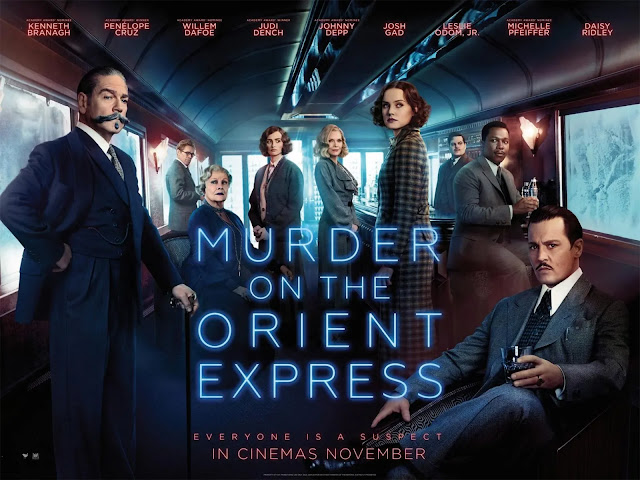 
Murder on the Orient Express is based on the classic novel by Agatha Christie and features the famous detective Hercule Poirot.  Kenneth Branagh directs and stars in this remake that also includes the likes of William Dafoe,  Michelle Pfeiffer, Judi Dench, Josh Gad, Daisy Ridley and Johnny Depp to name a few of this films all star cast.

The story follows the famous detective aboard the Orient Express when the train runs into an avalanche.   One character is killed during the night and the detective must solve the case before the train track is cleared up.  The film is excellent in many ways. Kenneth Branagh does a great job as Agatha Christie's famous detective as he interrogates the passengers trying to solve the murder.  The cast as mentioned above it stellar.  All the actors do a great job.  The movie is beautifully shot and does a great job of capturing the look of the 1930's look and style.  The scenes of train making its way through the countryside are eye catching.  The train itself is gorgeous work of art.

Somehow despite everything that I loved about the film it somehow still feel a little flat.  Part of my problem may be a subconscious knowledge of the story (I'm sure I've seen a previous version of the story before or something that was inspired by it).  As a result of my knowledge of the basic story --the twist in this murder mystery wasn't a surprise and therefore that portion of the mystery.  Not that a murder mystery can't be incredible without a twist (See any Columbo as an example where you know the murder at the beginning of the story).   Maybe the fact that there have been so many good murder mysteries that you can see on a weekly basis on TV throughout the years that make a big screen adaptation of an old story less intriguing.   Especially when shows like BBC's Sherlock Holmes starring Benedict Cumberbatch can seem as good a films.   Maybe the old school Murder Mysteries are more suited to TV these days.  I'm currently watching a bunch of old Murder Mysteries I recorded awhile back from the 1940's and I'm enjoying these old films --yet somehow these series feel like watching a TV show.

I would definitely say this is worth a rental.  It may be more fun for someone that hasn't heard of seen this tale before.