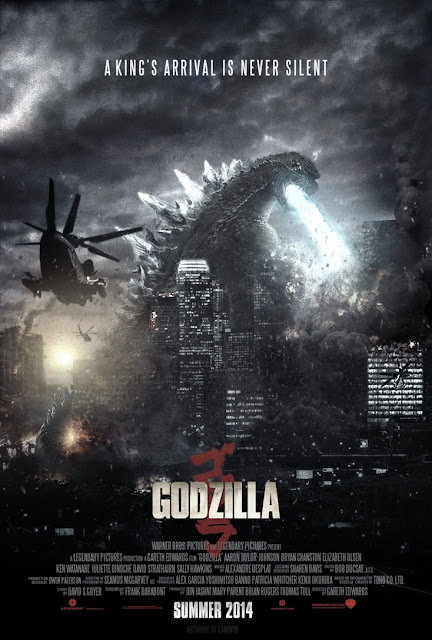 After Rogue One I saw that Godzilla directed by Gareth Edwards was playing on TV so I decided to record it on the DVR and watch it while I was sick in bed this weekend.  I had liked what he did with his low Godzilla style movie Monsters......So I figured he was the perfect person to direct this film.

The movie starts off a little slow and really takes awhile to get going.  Once we finally get to the real action near the end the footage of Godzilla hitting the 2 other Monsters is pretty epic.  This Godzilla is much better than the big budget  1998 version awhile back with Matthew Broderick.  That film didn't think Godzilla only was interesting enough so they had a bunch of mini Godzillas that looked like Raptors from Jurassic Park .   I was really disappointed with that film.

This Godzilla did a much better job than that 1998 version---but it wasn't as good as Pacific Rim. Pacific Rim was bas ass and took the genre to the next level.  This movie needed to step up to that level and failed to do so.    Instead if felt more like a big budget version of the old he giant monster battling in  costumes stomping  on models of cities.  The special effects for the end of the film were great and enjoyable.....I just don't feel this movie will be memorable years from now. It just wasn't special or unique enough to stand out.  The final battle was just a little bit too little to late to win me over.